After periods of intense training, the best performances in strength or endurance sports usually occur following an appropriate taper phase.  A taper is a progressive and non-linear reduction of a workload during training for a period of time prior to competition.  In other words, after weeks of routine training workouts, where the intensity or volume is strategically increased for a period of time, there is a large reduction in the training load in the week or two before a competition or event.  This tapering technique is designed to avoid injury, overtraining, psychological stressors and/or extreme fatigue prior to the event in order to achieve maximal performance. 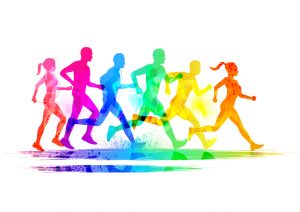 There are multiple facets as to why a pre-event taper is vital to achieving the best performance possible.  Changes in the cardiovascular system include an increase in maximal oxygen uptake (measurement of endurance), and possible hematological changes including increased blood volume, hemoglobin (oxygen carrier within the blood), hematocrit (volume of red blood cells within the blood), reticulocytes (indicator of bone marrow activity), as well as, a reduced red cell distribution width.

According to a research study completed in 2014 at the Laboratory of Sport, Expertise and Performance, the most efficient taper strategy for maximizing performance gains was to perform a 2-week taper with an exponential reduction in training volume by 41%-60% without any modification of either training intensity or frequency (1).  In other words, reducing load or speed and reducing the amount of exercise sessions per week were found less effective than reducing the volume of each workout.  For example, a reduction in volume could be performing 1 set of an exercise when you normally do 2 or 3 sets.  Another important finding of this study is that a period of overtraining prior to initiating a taper has been found to be even more effective than just a tapering phase itself.  However, the degree of overtraining prior to the taper is crucial because too much performance supercompensation can lead to worsening performance.

When working with a coach, whether it is for running, strength training, or general sports conditioning, be sure to discuss the appropriate taper period for you. Programming a reduction in the volume of exercise may be beneficial to your performance in your race, game, or competition.