Knee injuries are common among athletes of all ages. Mostly common are tears or sprains of the the anterior cruciate ligament, or ACL. This small but powerful ligament works with the posterior cruciate ligament (PCL) to allow the knee to bend back and forth. It also helps to prevent the tibia from sliding out in front of the femur. The ACL also works to keep the knee stable during rotational movements.? 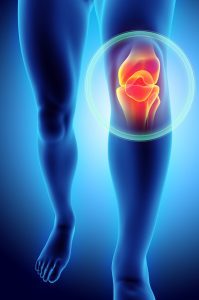 Athletes who play high-demand sports such as football, soccer, and basketball are most at risk of tearing an ACL. There is a risk of both contact and non-contact injury while playing sports. Even still, a majority of ACL injuries are non-contact. Female athletes are at an even greater risk of tearing their ACL. There are several factors that put females at a higher risk, including: overall strength (specific to the hip joint & lower extremity muscles), high Q angle (angle from the knee to the hip), and an inward collapse of the knee upon landing (valgus). Two of these factors can be modified with proper strength training to reduce the risk of injury. More often than not, however, athletes are focused on skills for their sport rather than strengthening. This is the greatest risk of all because weak athletes get injured.

Implementing a program comprised of both strength exercises and jumping/ plyometric movements with younger athletes is key to help reduce the risk of injury. These types of programs are more often done at the collegiate level, however, youth and high school athletes should implement strengthening in addition to skill work.  Exercises, such as the ones below, should be performed regularly, and executing them with proper form is vital. Warming up is essential to prime the muscles and the joint for movement. As the athlete builds strength in both bi-lateral and uni-lateral movements, they can then progress to performing plyometric movements. These exercises focus on developing power and proper landing form. The best injury prevention is prehabilitation- strengthening before an injury occurs to ultimately decrease the athlete’s risk on the field.

The following are some examples of warm-up, strength, and plyometric exercises that could be used in an ACL prehab or rehabilitation program.