This recipe comes from Cooking Without Recipes, where you learn how to make a delicious dish, but don’t worry too much about the nitty-gritty details of the recipe, so you can create your own spin! 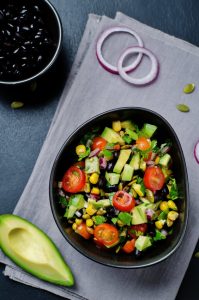 Bonus: If you’re making the salad in advance, grill the corn, chop the tomatoes, and make the vinaigrette ahead of time. Then just assemble (and cut into the avocado) when you’re ready!

Original recipe from Bon Appetit can be found here!